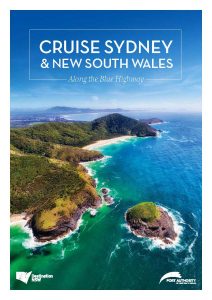 New South Wales (NSW) is the country’s most geographically diverse State, offering a wide range of attractions, both natural and man-made. With nine cruise ports along the scenic coastline known as the Blue Highway - each offering striking natural beauty and unique experiences for the visitor - NSW caters to all segments of the cruise market.

Sydney continues to be Australia’s cruise gateway and one of the world’s most beautiful  destinations with its iconic Sydney Harbour Bridge, Sydney Opera House and pristine beaches. The city offers a blend of art, culture, dining, events and outdoor activities, coupled with contemporary and colonial architecture. With two ports, Sydney was named the best cruise destination in Australia and New Zealand in the 2018 Cruisers’ Choice Destination Awards — an award based on reviews of passengers to Sydney the previous year.

Sydney is complemented by eight other beautiful ports along the NSW coastline — Eden, Batemans Bay, Kiama, Wollongong, Newcastle, Trial Bay, Coffs Harbour and Yamba. The growing popularity of cruising in NSW has cemented the State’s place as the premier and unrivalled cruise destination in Australia and the South Pacific.

NSW, particularly Sydney, continues to grow as a major international cruise destination. In 2015-16 cruise expenditure in NSW was around $1.05+ billion^ with Sydney’s economic benefit estimated at over a $1 billion. There was a significant increase in cruise ship visits and passenger days in port in the same year. Sydney received 325 cruise ship visits, 334 cruise days in port  and just under 1.3 million total passenger days in 2015-16*.

^ A reduction in direct expenditure from 2014-15 is directly due to a significant decrease in bunker (fuel) prices, offsetting growth in crew and passenger expenditure

Brochure: Cruise Sydney & New South Wales - Along the Blue Highway (PDF 3 MB)
Includes berth details and port parameters plus a list of key attractions at each of NSW’s nine ports.