You're in: DESTINATION NSW > News & Media > Media Releases > Flying solo in Sydney- The reasons why lone travellers head to NSW

Travelling on your own can be a daunting prospect, but it doesn’t have to be with many tours, restaurants and hotels throughout NSW catering for solo travellers.

Destination NSW CEO Sandra Chipchase says that there are many reasons single visitors travel to Sydney and NSW.

“Some travellers are backpackers and arrive with a taste for adventure and the directions to the nearest youth hostel, but solo travelling is not limited to the young. Lone travellers come from all walks of life, from the business traveller taking a few extra days to explore Sydney, to older independent travellers keen to indulge themselves with the trip of a lifetime.

“Sydney is a safe destination with friendly locals and a range of welcoming experiences which makes it the perfect destination for lone travellers,” she says.

Here are four suggestions for unaccompanied travellers who can visit where they want, when they want:

There’s a reason 92 per cent# of international solo travellers head to Sydney as the city has much to offer those travelling alone. Sydney has hundreds of hotels at a range of price points and centrally located in the city, making it easy for solo travellers to see the sights.

For those who want to meet locals and fellow travellers along the way, join a tour such as Bonza Bikes’ guided group tours which offer an easy cycle through parks, along the harbour, and past all of Sydney’s iconic sites.

Sydney also has the nightlife covered with evening group tours such as Dave’s Pub Walks which take place daily in the historic Rocks District. This fun tour offers a glimpse of Sydney’s history, and a taste of its dynamic, growing craft beer scene.

Sydney is famous as a multicultural city, which is reflected in the restaurant scene. An I Ate My Way Through food group tour is a fantastic way to discover Sydney’s diversity, meet people and enjoy quality cuisine. Choose a Middle Eastern food tour in Auburn, a Vietnamese food tour in Cabramatta or a Chinese food tour in Chinatown.

For those with a penchant for fine dining, the acclaimed Momofuku restaurant at The Star entertainment complex offers an ideal environment for solo travellers who want to try chef and founder David Chang’s Asian-European fusion dishes at the countertop seating which circles the kitchen.

Heading North along the Legendary Pacific Coast is a time honoured tradition amongst backpackers, and sunseekers alike. Stop off at Coffs Harbour, on NSW’s mid-north coast, a friendly town with lots of options for solo travellers.

The Hoey Moey Backpackers at Park Beach has female-only and mixed dorm rooms as well as private rooms with ensuites, while Coffs Jetty Bed and Breakfast has four rooms with private entry or guests can join the owners for dinner.

Solo travellers can sign up for a group lesson with Lee Winkler’s Surf School to learn to ride the waves in no time. A plantation tour at Coffs Harbour’s landmark Big Banana attraction is a must. Join an Aboriginal ranger on an evening tour of Muttonbird Island Nature Reserve, stroll through the Botanic Gardens and check out the harbourside markets on Sunday morning.

Mingling in the Mudgee food and wine region

Around 3.5 hours’ drive from Sydney, the Mudgee wine region is a wonderful place to spend a few days. Culinary passion runs deep in this region with local farmers and winemakers growing great local produce for the abundance of cafes and restaurants in town, farm gate tours, cellar doors and epicurean outlets.

Mudgee Explorer Tours offers half and full day small group tours to wineries for up to eight people, as well excursions to other nearby attractions, including hiking along the Goulburn River to the beautiful sandstone rock formation known as The Drip, Ferntree Gully and sunrise at Castle Rocks.

Blue Wren Wines has a Kitchen Table dining experience in which guests can eat at the kitchen work bench and discuss the food they are eating with the chef, while boutique micro-brewery and restaurant Mudgee Brewing Co. has a great atmosphere, with live music three nights per week.

Wonderful Wollongong for One

South of Sydney lies the Illawarra coast line and the city of Wollongong, home to a buzzing cafes, restaurant, bar and brewery scene.

Journey along the Grand Pacific Drive, past rugged coastline, beaches, seaside towns and over the iconic Seacliff Bridge. A Harley Davidson side car tour with Just Cruisin’ Tours is the perfect way to see the coast. Stop to take photos at lookouts, and for a drink in the beer garden overlooking the ocean at the historic Scarborough Hotel, which was built in 1886. Visit Nan Tien temple, which is the largest Buddhist temple in the Southern Hemisphere, hang out at the beach and stroll to the Wollongong Head Lighthouse. Or, if you are a thrill-seeker, book a skydive with Skydive the Beach.

Enjoy delicious fresh food overlooking North Wollongong Beach at Diggies Café, or pop into Three Chimneys for great coffee and sourdough baked on site daily. The Illawarra Brewing Co offers hearty pub fare with 34 locally-crafted beers on tap including a Summer Ale, Rust Amber Ale, and Porter. There’s plenty of local seafood restaurants including The Lagoon Seafood Restaurant and Bombora Seafood Restaurant to enjoy locally caught fish and oysters. Sandygoodwich café has communal dinners once a month, with the aim of celebrating the community and bringing together people.

Share your favourite NSW island getaway with us on social media by using the hashtag #NewSouthWales.

Download a PDF version of this media release (PDF 256kb) 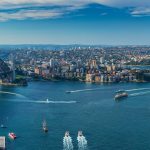 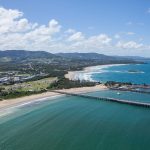 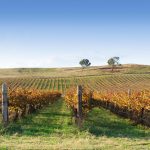 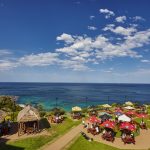