The world’s largest festival of light, music and ideas

Vivid Sydney, one of the most spectacular light shows in the world, is set to impress again when it returns to Sydney for 23 nights from Friday 26 May to Saturday 17 June 2017.

Owned, managed and produced by Destination NSW, the State Government’s Tourism and Major Events agency, Vivid Sydney attracted more than 2.31 million people from around the globe in 2016.

Vivid Sydney is the world’s largest festival of light, music and ideas, which annually transforms the harbour city into an outdoor art exhibition with its colourful creative canvas. The event features large scale light installations and projections (Vivid Light); music performances and collaborations (Vivid Music including Vivid LIVE at the Sydney Opera House); and creative ideas, discussion and debate (Vivid Ideas), all celebrating Sydney as the creative hub of the Asia-Pacific.

NSW Minister for Trade, Tourism and Major Events, Stuart Ayres said: “Vivid Sydney is the world’s largest festival of light, music and ideas, and the biggest event in Australia.

“Last year, Vivid Sydney boasted its biggest program ever with more than 90 light installations and projections created by more than 150 artists from 23 countries, 190 music performances and 658 speakers in 183 Vivid Ideas events. Highlights included Songlines, an incredible projection inspired by the ancient dreaming tracks that weave across landscape and skies, created with the work of six renowned Indigenous artists and the first Indigenous lighting of the iconic Sydney Opera House Sails.

“Vivid Sydney 2017 promises to be even bigger so put Friday 26 May to Saturday 17 June in your diary, and start planning a trip to see Vivid Sydney now.”

For a glimpse of Vivid Sydney’s magic, watch the timelapse from the 2016 event.

Where: Sydney, Australia – Locations across the city including lighting projections along the iconic Sydney Harbour foreshore including the Sydney Opera House and Harbour Bridge.

Download a PDF version of this media release (PDF 397kb) 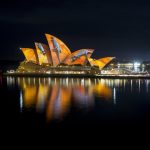 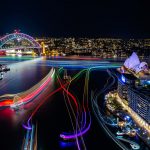