You're in: DESTINATION NSW > News & Media > Media Releases > Vivid Sydney lights up for 2015

Vivid Sydney lights up for 2015

Sydney has been transformed into a spectacular canvas of vibrant colour as the switch was flicked on Vivid Sydney for its seventh year in the spotlight.

“For the next 18 nights, visitors from across Australia and the world will arrive to see Sydney’s iconic landmarks, harbour foreshore and urban spaces transformed with spectacular 3D projections and 60 light installations,” Mr Ayres said.

This year’s festival introduces new precincts at Chippendale and Chatswood, expanded programming at Pyrmont and the University of Sydney, more than 150 Ideas events and its biggest music program yet, with over 95 performances.

“Vivid Sydney has been instrumental in transforming one of the city’s quieter visitor times into a thriving, vibrant period which in 2014 attracted more than 1.43 million people and injected $41.3 million into the NSW visitor economy,” Mr Ayres added.

“More than 25,000 Vivid Sydney travel packages have already been sold to international and domestic visitors, with the festival set to break travel package records with sales already up 25 per cent on last year.”

Those attending Vivid Sydney are encouraged to take advantage of the additional 3,500 extra trains, buses and ferries which will run throughout the festival.

Vivid Sydney is owned and managed by the NSW Government’s Tourism and Major Events Agency, Destination NSW, and runs from Friday 22 May to Monday 8 June.

Download a PDF version of this media release (PDF 143kb) 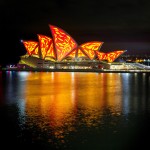